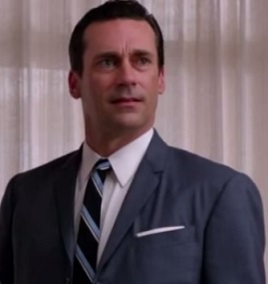 Don Draper’s character on AMC’s Mad Men as a big-time advertising executive and ruthless business man based in the 1960’s was inspiring for many who watch the show. He wore admirable suits, was charismatic, was successful, drank good whiskey, and when his mind was set on something he thought he wanted he took it. Here are a few things we learned from Don Draper.

How to Fire a Subordinate

“I want you to do something for me Pete. I want you to get a cardboard box, and put all your stuff in it.” – Don

Out of all the episodes this is one quote I remember well, when Pete went over Don’s head in front of a client. After the meeting Don calmly lets Pete know he crossed the line by basically telling Pete he was fired.

How to Rehire a Subordinate

“I want to be very clear about this: You were fired. I wanted you out. Cooper wanted you out. And you would be if it weren’t for this man. [Signaling to Don] He thought you deserved another chance. That’s right. He fought for you.” – Roger

Maybe there was a time when an employee did something intolerable and out of anger you fired them on the spot only later to realize after you’ve cooled down that the employee was essential to your business and had to rehire them. That’s what happened after Don told off Pete, only to later converse with Cooper and Roger who then told Don they’re agency needed Pete.

Use Fear to Your Advantage

Fear can stall and immobilize us. It can prevent us from getting what we want and where we want to go. We can reprocess the way we think about fear by thinking of our fear as a challenge and use that challenge as motivation.

Take Control of A situation

“Maybe I’m not as comfortable being powerless as you are.” – Don

Many times when a situation or problem occurs individuals, employees, managers, and/or business partners start to panic because they don’t know what to do, leaving them feeling powerless. In some instances instead of trying to fix the problem people will focus their energy on trying to figure out who to blame leaving the problem unattended. When a problem arises be the person who takes control of the situation, even if it isn’t your responsibility or it was someone else’s fault. Others will take notice of your actions and see you as a leader.

Know what it is You Want

“I keep going to a lot of places and ending up somewhere I’ve already been.” – Don

This is perhaps one of the most important things we can learn from Don Draper’s character because Don did not know what it was he truly wanted. Don searched and tried to figure out what it was he wanted by hooking up with different women and randomly falling off the grid; for example that business trip to California he went on with Pete and just disappeared without telling Pete or anyone else where he was or when he would return. Not knowing what it was he wanted in life ended up slowly destroying his career, his marriages and other personal relationships including his relationship with his daughter. He drank excessively and became dependent on alcohol.

Don’s character is a great example of how money will not make a person happy and to be happy you first need to figure out what you want in life. By knowing what you want or having a set goal you’ll feel a sense of purpose and meaning. You’ll become more passionate about your career and inspire others along the way.